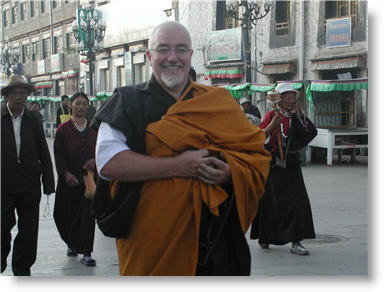 Dr. Je Kan Adler-Collins was born in the United Kingdom and entered the British Military at the age of 18 where he trained as a Registered Nurse in the Royal army Medical Corps. Medically discharge in 1990 he developed an interest in Complementary and Alternative Medicine 9CAM) and how they could relate to nursing practice and education.  He served on a Government Steering Group which started him on his life work of researching standards and teaching in Complementary Alternative Medicine and healing. His studies have taken to many different cultures and countries  and in 1995 he became ordained as a Japanese Buddhist priest of Shingon Shu ( Koyasan) and brought his Buddhist research into his practice of a nurse in terminal care. He took his PGCE at Bath University College in 1997 and Masters in Education in 2000 at Bath University in Education with a focus of educational curriculum design and moved to Japan in 2000 where he started to build his own temple and healing centre in the mountains of Kyushu, South Japan. He worked with living action research approach to education and life enquires and completed his PhD at Bath (Education) university in 2007.  Working as an associate professor of nursing at Fukuoka Prefectural University he introduced the first healing curriculum for Japanese nursing using safe touch, and body work. In 2007 he moved to the Associate professor position of a health Promotion Centre at Fukuoka Prefectural University with a focus on developing community training and course in health care and CAM resulting in opening the first end of life care centre ran by community therapists for their own community. He travels the world lecturing on creating healing and therapeutic spaces both in the classroom and in nursing practices with a particular interest in energy healing research and curriculum development within China, Tibet and Thailand using living action research accounts of practice as evidence of learning. His temple offers retreats and healing and the first stages of a hospice have just been completed.