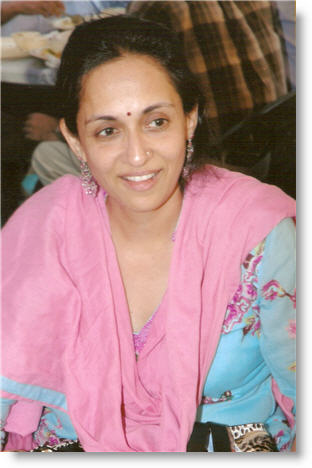 I was born and brought up in Bombay (Mumbai), the most modern metropolitan city in India. My parents both highly educated, my mother a surgical oncologist and my father the chief producer of the Indian National Theatre. While in college I started modelling, set and costume designing for a professional theatre company. I was always something like a bricoleur , it is the pattern I have followed all my life. I went on to acting on stage, in films and television, became a top model and subsequently went on to becoming Miss India, I was a commercial artiste, a potter, good at quilting and even studied Ikebana. Marriage and children encouraged my ability to handle all the different fields at onetime.
When my children were young, the government of India had started an educational program with a mission statement said ‘Each One Teach One’. It meant that each educated Indian could teach at least one unlettered countrymen. I was greatly influenced by it. I believe that an educated citizen should be a valued part of the Indian educational community and we as educated Indians have the responsibility to bring about change in the educational system in our country.
I strongly believe some ‘higher order’ had plans for me and hence my wonderful journey through drama and fine arts. I was not to be a mere actor but all my theatrical experience enabled me to employ my understanding and build a unique and child-friendly method to enhance Life-Skills. It enabled me to make a contribution to the mental health practice in the wider community.
I see this work as a support to all children. Not as a study of the situation, but as a way to make their world a better place in which to live. My aims are to help the children to overcome adversity and become resilient, to learn how to face the problems they have to deal with in their young world, to empower them so they can grow into well adjusted adults. These are lofty goals but they are at the heart of what I am trying to achieve. I know my limitations. However, as Lord Krishna says to Arjuna in the Bhagavad Gita :

You are qualified simply with regards to action, never with regards to its result.
Do your duty to the best of your ability, O Arjuna, having abandoned attachment, undertake action…evenly disposed as to their success or failure.(Bhagavad Gita, 2:47-48)